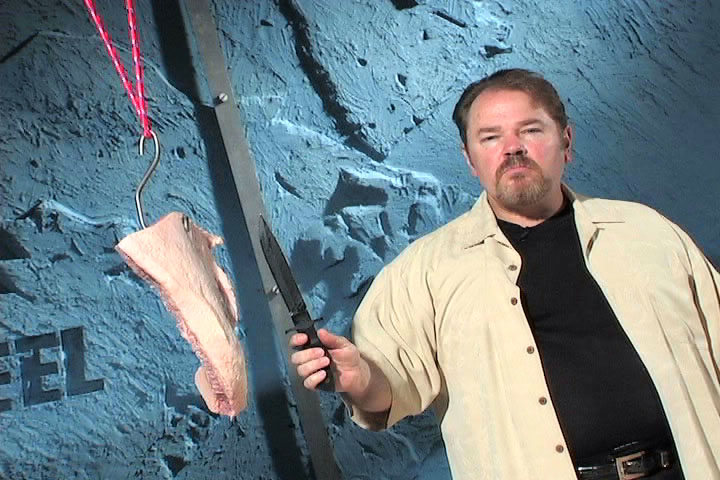 Lynn C. Thompson grew up in Brazil. From an early age, his father taught him to shoot, how to use a knife and to hunt. For him and his brothers, the wilderness was like a second home and since then, he has been filled with a love of nature and cultivates a great passion for hunting.

Lynn is a true martial arts expert. Since his earliest youth, he has dedicated himself to the study of many martial arts, such as boxing, Wado-ryu karate, Jeet Kune Do, Kali, Thai boxing and Brazilian Jiu Jitsu.
Whatâs more, he is not only an extremely good shot and experienced hunter, but also an excellent fighter in the fields of stick fighting, saber fencing, Japanese and European sword fighting, and not least a true virtuoso in all kinds of knife fighting techniques.

Lynn exclusively trains full-contact with minimal protection and was named among the top 10 knife-fighting instructors in the USA by the trade magazineÂ "Tactical Knives". Over the years, he has been constantly refining his fighting technique and building up his skills, thus developing his very own fighting style. He currently trains up to 16 hours a week, a good portion of which he spends practicing with renowned martial artists such as Guro Ron Balicki and professor Anthony Delongis. He has many times demonstrated his proficiency, among others at tournaments of the notorious Dog Brothers.

Over the past thirty years, Lynn has held countless knife fighting workshops all over the world and has produced a considerable series of training and educational videos in which he shows a wide range of fighting techniques. These videos mostly feature the Cold Steel products he developed and Cold Steelâs president stars in a majority of these productions himself, gladly passing on his incredible wealth of knowledge.

Lynn C. Thompson develops most of the Cold Steel products himself or in cooperation with his team which also possesses a profound knowledge and experience in martial arts. Each product is elaborately designed right down to the last detail, before being tested to the breaking point. Ultimately, Cold Steelâs "brutal" quality control has always significantly contributed to the companyâs success. Any product that does not fully and completely meet the bossâs expectations quite simply gets the chop and will definitely never make it to the market!
Lynn's incredible experience, his practice-oriented perspective and his clear position on what his products should be able to endure have made Cold Steelâs products what they are today - mercilessly sharp, incredibly resilient and sensationally easy to handle! Simply put, you can rely on them in absolutely any situation life may throw at you!